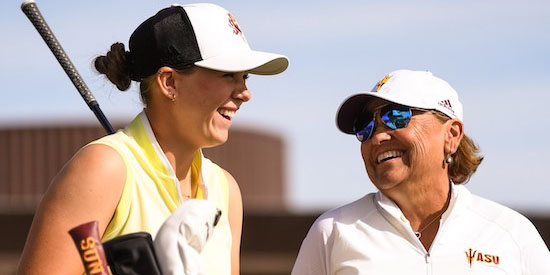 Grace Summerhays made eight birdies during the opening round of the Southwestern Women’s Amateur, carding a pair of 32s at Desert Mountain’s Geronimo Course to lead the field by four over Washington junior Camille Boyd and Ting-Hsuan Huang.

Summerhays, the younger sister of Sun Devil men’s golfer Preston Summerhays and daughter of teaching professional Boyd Summerhays, began the day with three birdies in her first six holes and made her lone bogey at the par-4 seventh — her third to last hole. The Scottsdale native reached match play at last year’s U.S. Women’s Amateur and tied for 10th last month at the NCAA Women’s Central Regional, carding three consecutive rounds of 73.

Boyd, the Husky from Yorba Linda, Calif. who broke the Meadow Club course record during this three-stroke win in April at the Juli Inskter Invitational, also circled three birdies on her card in the first six holes, but suffered a costly double-bogey on her final nine, coming at the par-3 4th.

Huang, the 16-year old from Chinese Taipei, made two birdies and an eagle en route to her 3-under 68. Boyd and Huang are a shot clear of Ohio State senior Kailie Vongsaga, and two clear of a seven-way tie for fifth at 1 under.

In the Men’s Division, Shea Lague already had two eagles under his belt heading into the first of two par-3s on the Geronimo Course’s front nine. Starting on the back side, the San Diego State sophomore from Jamul, Calif. made threes on each of the two par-5s he had played thus far, holes 12 and 1.

It’s not uncommon for a player of Lague’s caliber to card two eagles in a round, but things were about to get crazy.

Lague’s tee shot at the par-3 4th went in the hole for his third eagle of the day. 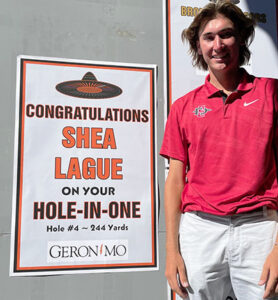 The ace pushed him to 6 under before a bogey and two birdies would close out the first-round 64, securing a two-shot on day one at Desert Mountain.

UC Davis junior Lucas Carper and Arizona mid-amateur Cory Bacon are locked together at 5 under, with Carper going bogey-free for his 66 and Bacon shooting 32 on his second nine to jump towards the top of the leaderboard.

Rounding out the top-five are Rutgers sophomore and Scottsdale native Cade Anderson, as well as Arizona State junior Gabe Salvanera. Both posted 4-under par rounds of 67 and are three back of the lead.

Following Thursday’s second round, each field will be cut to the top 36 and ties, leaving the third and fourth rounds to complete Friday and Saturday.