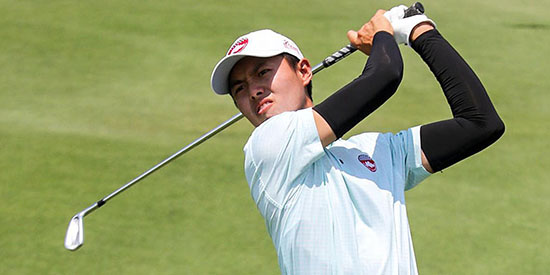 A battle on both sides developed on Thursday at the second round of the Southwestern Amateur, even in the midst of an Excessive Heat Warning as temperatures rose to a scorching 116 degrees.

Day two opened up with University of Tennessee junior Nicole Whiston maintaining her lead in the Women’s Championship, but she was met with some company by Purdue freshman Ashley Kozlowski. The pair found trouble early, each with a front-nine double bogey, but Kozlowski recovered and shot 2-under 69 for the day to tie it up at 1 under through 36 holes. Whiston held onto first steadily with a 1-over 72.

The leaders have plenty of company, with 11 players within four shots of the lead. University of Arizona junior Ya Chun Chang of Taiwan is one shot back at even par, while her fellow countrywoman Ching-Tzu Chen of the of the University of Oregon is another shot behind, tied with Arizona State’s Ashley Menne of Surprise, Ariz.

Two players are in the field fresh off of playing in the U.S. Women’s Open at the Olympic Club. Noemie Pare of Canada is currently tied for 12th, while Ohio State’s Aneka Seumanutafa is tied for 22nd with two rounds to play.

The Men’s Championship resumed in the heat of the afternoon, with round one co-leaders James Leow and Christian Banke continuing their race to the top after matching rounds of 8-under 63 in the first round. Leow, an Arizona State junior from Singapore, fell back early with a double bogey on No. 14 before two consecutive birdies on the front nine put him ahead of the Arizona Wildcat to finish with a 1-under 70. Banke fell back to tie for second beside Hazen Newman after carding a 1-over 72.

Newman, an Oklahoma State freshman from Las Vegas, had the round of the day, a 5-under 66, to pull into the second-place tie with Banke. The top three have separated themselves from the rest of the field, with the next group of players four shots back at 3 under. In all, 14 players are under par through 36 holes.

The field was cut to the low 40 players and ties in both the Women’s and Men’s Championships for the final two rounds. The action continues Friday for round three, with early tee times promising cooler temperatures the last two days.