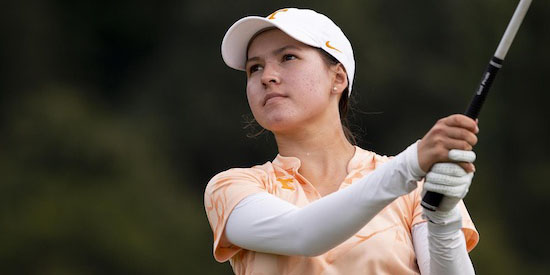 Men’s Championship
The Tournament is seeing record temperatures, but the slight breeze helped cool the morning play for the Men today.

The Men’s Championship produced many great shots and scores. The leaders, James Leow, and Christian Banke, both shot 63 (-8). James is an Arizona State junior from Singapore and Christian is a graduate student at the University of Arizona, from Danville, California.

Nate Anderson, calling Paradise Valley, Arizona home, lit up the course with a hole-in-one on the par-3 fourth hole, along with an outstanding eagle 2 on the par-4 fourteenth.

Women’s Championship
The Ladies took to the course for an afternoon of scorching temperatures, as well as the wind becoming a major factor in shot-making.

The leader, Nicole Whiston, a junior from the University of Tennessee, shot a very impressive 2 under par. She comes from San Diego, California.

Ami Gianchandani and Ching-Tzu Chen are one shot behind, shooting 1 under par. Ami is from Watchung, New Jersey and a junior at Yale University. Ching-Tzu Chen, from Hsinchu City, Taiwan, is a sophomore at the University of Oregon.

Tomorrow the women will take to the course in the morning and the men will play in the afternoon’s tougher conditions. At the end of the day both fields will be cut to the top 40 and ties, to compete in the final two rounds.

Nothing but raves from players and followers alike for the beautiful condition of the course, thanks to Matt Hamberg, course Superintendent and his staff of 30 who have produced velvet fairways and greens that roll true. Spectacular!