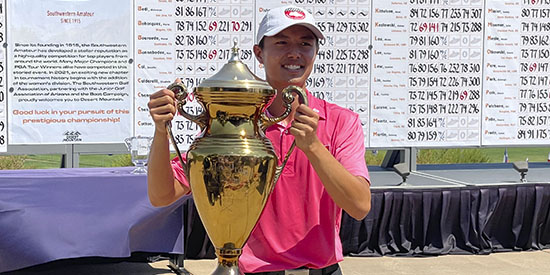 James Leow perseveres, pulls away to win the Southwestern Amateur

In the 106th year of the Southwestern Amateur, James Leow, an Arizona State junior from Singapore, put in a commanding performance to earn a three-shot win at the Outlaw Course at Desert Mountain in Scottsdale, Ariz.

Leow’s win was a long time in the making, after a surgery in December sidelined him during the collegiate spring. A resilient return to the amateur scene made the Southwestern Amateur his second event of the summer after last week’s Dogwood Invitational, where he placed 37th.

Some self-actualization and stretching seemed to do the trick this week.

“I knew my game was in the right direction, I was playing the shots I needed to, but my body wasn’t quite there. I had one to two days (between the Dogwood and the Southwestern) to stretch it out, get back into it, refresh and play out here.”

His quick turnaround resulted in championship-level golf, setting the precedent after a first-round 63 that included birdies on the final four holes. He was tied for lead with Arizona’s Christian Banke after the opening round but made the championship all his in the succeeding days.

The final round had Leow starting off in excellent position, three strokes ahead of the field. A thunderous 67-67 in the last two rounds by Oklahoma’s Tucker Allen briefly threatened the leader, at one point creating a tie before Leow’s back-nine birdies on No. 14 and No. 16 once again separated him from the pack. Allen went five-under through 11 before a bogey on No. 15 set him back at nine-under.

Leow closed it out strong, as a tough birdie miss on No. 17 became no big deal after an excellent drive off of the 18th put him in great position to attack the pin with a downhill wedge. He would miss another birdie attempt after he got onto the green, but a seamless tap-in for the win proved all he needed.

“I’d be lying if I said there weren’t any nerves hitting the tee shot on the last,” Leow said. “As soon as I flushed it, it felt really great. A lot of my nerves were kinda put away.”

Leow closed with a 70 to finish at 12-under 270 for the championship, three shots ahead of Allen, who was trying to win his third desert tournament this year. The Oklahoma Sooner won the Saguaro and Grapevine Amateurs in the first two weeks of 2021.

Banke (73) tied for third at 6 under with NCAA Division II champion Keegan Bronnenberg of the University of Indianapolis (69), and Auburn’s Ryan Eshleman (72).

Scoring was excellent on the difficult Outlaw Course, with nine players finishing in red figures for the championship.