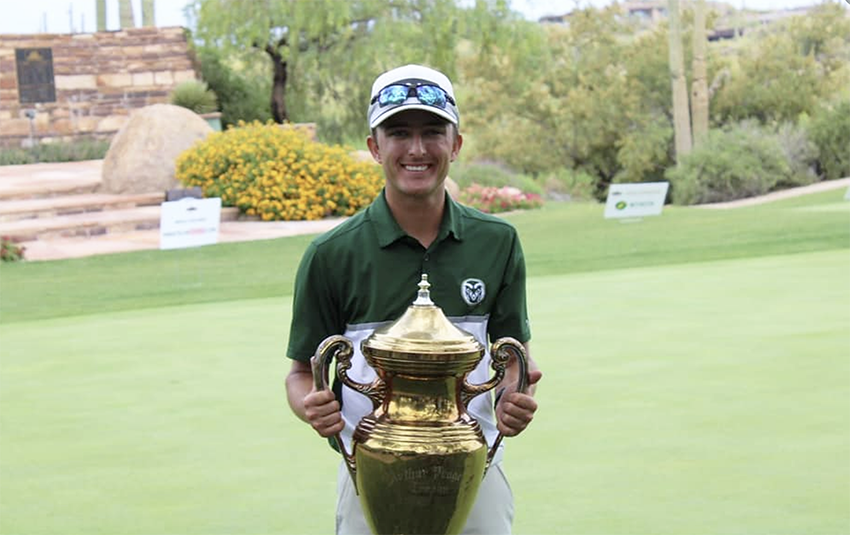 On Thursday, it was just a personal best. By Saturday afternoon, it was a championship.

Davis Bryant, fueled by a second-round 63, steadily climbed the leaderboard during the final 36 holes at Desert Mountain Club to capture the 107th Southwestern Amateur title.

“It was a blast. That was my lowest round in a competitive atmosphere,” Bryant said of Thursday’s 8-under-par score, which featured nine birdies and an eagle. “I remember when I got to 9 under, I definitely started thinking about that magic number with a five in front of it.”

The Aurora, Colo. native wasn’t the only player to sign for 63 that day. Arizona State junior Gabe Salvanera fired 30 coming in, and took a four-stroke lead at the tournament’s halfway point because of it. By Saturday, the pair were neck-and-neck to the finish in the final pairing.

Bryant stood on the first tee box at the Geronimo Course two back of Salvanera and an additional stroke behind 54-hole leader Jaden Cantafio. At the turn, coming off three consecutive birdies, he had caught Salvanera and overtaken Cantafio. A birdie at 12 briefly gave Salvanera the advantage before Bryant rolled in birdies on two of the next three holes, while Salvanera made two bogeys.

Bryant wasn’t checking his phone, so when the winds were whipping up on the 18th tee box, those thoughts weren’t racing through his head.

“Fortunately for me, I didn’t know I had a two-shot lead,” Bryant said. “I had been keeping track but I decided to just start focusing on my own game.”

Bryant played the downhill shot 185 yards with the hurting wind. He opted for a punch 7-iron. His well-struck shot right of the pin couldn’t crest the ridge in the center of the green and fell back to the right nearly onto the fringe, leaving a long birdie try. Salvanera took dead aim and nearly stuffed it for a short look, but it too failed to stay on top of the ledge.

After Bryant nestled his lag putt to about three feet, Salvanera narrowly missed his 25-footer which would have forced Bryant to make.

“It was incredible. I’m so happy to have come out on top and be the champion today,” Bryant said. “Gabriel and I, and a couple others, were battling back and forth. I had a few loose shots but I took my medicine and trusted my putter, which is usually the backbone of my game.”

A fifth-year senior at Colorado State who will play his final season for the Rams in the fall, Bryant has a loaded summer schedule remaining, including a hometown trip to Denver Country Club for the Trans-Miss Championship in July.

“I’ve never actually played Denver C.C. so I’m looking forward to getting in a practice round there next week,” he said.

Salvanera settled for a solo runner-up finish following back-to-back 1-over par 72s on Friday and Saturday. The Queen Creek, Ariz. native had only bogeyed three holes through the first two days but managed to make five in his first eight holes in the third round. He battled back, though, eagling the par-5 9th and adding a couple additional birdies on the back side.

UC Davis junior Lucas Carper and incoming Oregon State freshman Rylan Johnson shared third place at 9-under par, both posting two of just seven rounds in the 60s during Saturday’s finale. Carper had the lowest score of the day, a 5-under 66 that has him already thinking about next year.

“When I woke up this morning, I knew it was going to be a different day than yesterday,” Carper said. “I’ve always performed well in this event but I’ve always come up short. I’m really excited for next year to try again and hopefully take a winning stand at this.”

Carper struggled to a 75 on Friday but had the confidence that he could turn things around. It resulted in a nine-stroke difference, including seven on the back nine.

Johnson, from the Phoenix suburb of Gilbert, Ariz., shot 2-under 69 to cap off a consistent week where all four rounds were under par. The victorious Bryant was the only other player to accomplish that this week.

Cantafio had two costly doubles on the front side and was quickly outpaced by Bryant and Salvanera, but resiliently went 2 under his last 10 holes and sealed a respectable fifth place finish. The Washington State junior from Tustin, Calif. put together a bogey-free 64 on Thursday and paired that with 68 on Friday to own a one-shot lead with 18 holes remaining.