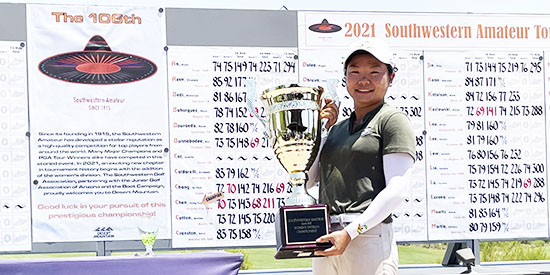 Standing on the 72nd tee at the Outlaw Course at Desert Mountain, Ching-Tzu Chen (Taiwan; University of Oregon) had already bogeyed three holes on the back nine and could sense that her lead was shrinking. Then, while waiting on the tee she decided to check the scoreboard to see that her lead was two shots.

“I don’t suggest that any player do that”, said a smiling Chen afterward.

Her tee shot went wayward to the left, so much so that she had to hit a provisional ball, but Chen didn’t let it rattle her any further.

“No matter where my golf ball goes, I know that I tried my best.”

Chen was able to find and play her tee shot, but in the meantime, her fellow countrywomen Ya Chun Chang (University of Arizona) birdied the 18th in the group ahead, trimming Chen’s lead to one.

From there a solid iron found the green, and a two-putt was enough to hold off Chang and give Chen the inaugural Southwestern Women’s Amateur title.

“I have struggled a lot the last few years, so I’m glad that I came this far and never gave up”, said Chen of her first major amateur win. “My teammates, my coaches and my parents always support me…and I could never get this far without all of them.”

In its 106th year, the Southwestern Amateur introduced its Women’s Championship. The women’s field in year one was strong, with many highly-ranked players and all five Power 5 conferences represented.

“I like all the vibes here”, said Chen of the newest Major of Women’s Amateur Golf. “All of the volunteers are really nice as are the rules officials.” Of the Outlaw Course, Chen agreed with the widely held perception of it being among the most at Desert Mountain, a worthy championship test.

“It’s really challenging. The fairways are tight and the greens are tricky too; different from the tournaments and golf courses we play during the season, which is another challenge but I really like it.”

Chen shot a final-round 73 to finish at even par for the 72 holes. Chang’s birdie at the last gave her a 69 and solo second at 1 over. Arizona State’s Ashley Menne and Ashleigh Park of the University of Texas shot matching 73s to tie for third at 3 over.

Canadian Noemie Pare, coming off an appearance at the U.S. Women’s Open at the Olympic Club, had the round of the championship, a bogey-free 6-under 65 that vaulted her into a fifth-place tie with Chen’s Oregon teammate Hsin-Yu (Cynthia) Lu and 36-hole co-leader Ashley Kozlowski of Purdue.

Nicole Whiston of the University of Tennessee, who led after the first two rounds, tied for ninth at 6 over par.