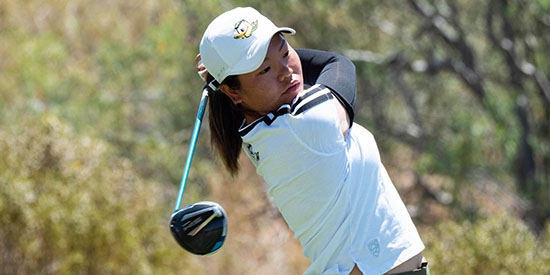 Chen rises, Leow defends lead as the final round is set at Desert Mountain

The action at the 2021 Southwestern Amateur is nearing a close and the race to glory on both the Men’s and Women’s side is getting hotter than this week’s desert sun. James Leow and Ching-Tzu Chen each finished Friday with strong rounds to get into pole position for Saturday’s final round.

Nicole Whiston of the University of Tennessee led the Women’s Championship for most of her round before an untimely stretch of bogey, double bogey and bogey on Nos. 15, 16 and 18, dropping her into a tie for fourth at two-over. Her replacement? Oregon’s Chen, who went three under on the back nine. Chen’s 3-under 68 puts her in the lead by three shots at 2 under heading into Saturday’s final round.

Ashleigh Park of the University of Texas also made a move in round three, shooting the round of the day, a 4-under 67, to get into a tie for second and into the final group for Saturday. She is tied at 1 over with Ashley Menne of Arizona State, who shot 71.

The 36-hole co-leaders, Whiston and Ashley Kozlowski of Purdue University, both shot 74 but are still in contention at 2 over and four shots back.

Leow, the Arizona State junior from Singapore, had little trouble maintaining his Men’s Championship lead in round three, as cooler morning temperatures helped him assemble another round in the 60s. The 2-under 69 was fueled by three birdies, including a bogey-free front nine. Entering the final round, Leow’s 11-under total puts him three strokes ahead of second-place Christian Banke of the University of Arizona, whose 1-under 70 helped him maintain solo second at 8 under.

But on Banke’s heels in third is a new name – Auburn’s Ryan Eshleman, who surged with the round of the day, a 6-under 65. Eshleman poured in three consecutive birdies to finish his round at 7 under and cap off his charge to Saturday’s final group.

The third round saw the best scoring of the championship, with 9 rounds in the 60s in the Men’s Championship and 5 in the Women’s Championship. Saturday’s final round will also be played in the morning, with lower temperatures and scores again promising a pair of exciting finishes.