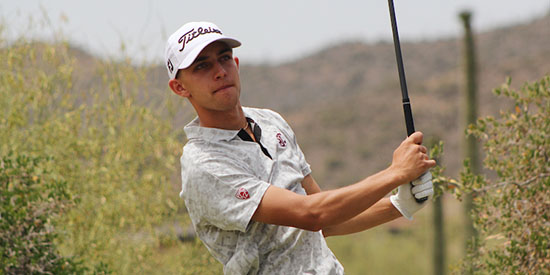 Jaden Cantafio grabbed ahold of the Southwestern Amateur lead early in Friday morning’s round. The Washington State junior from Tustin, Calif. carded 34 on the front side at Desert Mountain’s Geronimo Course, while playing partner and 36-hole leader Gabe Salvanera made bogey or worse on five of his opening eight holes.

Salvanera battled back, though, eagling the par-5 9th and adding a couple additional birdies on the back side to nearly catch Cantafio, who shot 68 on Friday and will take a one-shot lead into Saturday’s final round.

The pair of Pac-12 juniors fired two of the three lowest rounds of the tournament during Thursday’s second round, with Salvanera shooting 30 on the front side en route to a 63 and Cantafio going bogey-free for 64. Colorado State graduating senior Davis Bryant matched Salvanera’s 63 before turning in 1-under 70 for his third-round score. The trio will be the final group off the first tee, gunning for the title at the 107th year of this historic championship.

“Each day is a new day. Each shot is a new shot,” Cantafio said after his round. “As long as you’re having fun out there, that’s what it’s all about. It’s pretty fun to shoot 64 and then a 68, so we’ll see what happens tomorrow.”

Cantafio had his girlfriend Audrey Weir, a midfielder for the Cougars women’s soccer team, caddying for him Friday. Desert Mountain’s arduous terrain makes using a cart essentially mandatory, so Weir wasn’t carrying or pushing his bag. She was reading putts.

“She makes me feel really calm and keeps it fun out there,” Cantafio added. “Sometimes golf can become more of a grind than fun.”

Salvanera’s opening nine spelled disaster, as he sat 5 over while standing on the 9th green. That’s where things turned a corner.

“That eagle putt on 9 really helped,” Salvanera said. “I didn’t see much fall today and had a bunch of three-putts so making that 15-footer helped a lot.”

Scoring was significantly tougher Friday, with just five players signing for scores in the 60s and only another six breaking par. Oregon State incoming freshman Rylan Johnson was one of those six 1-under par rounds of 70, and like Salvanera, it took adversity to overcome a potentially detrimental start.

After a double-bogey at the par-5 1st and bogeys on holes 5 and 6, the Gilbert, Ariz. native would rattle off birdies at 7 and 8, followed by an eagle at 9. He sits in fourth place, five back of the lead and a shot clear of first-round leader Shea Lague in fifth.