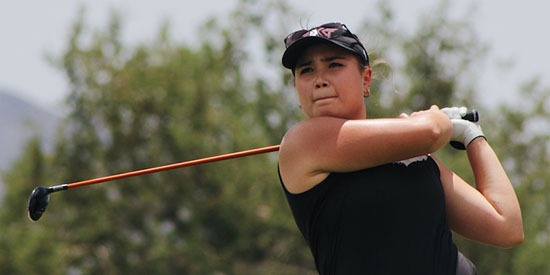 Reinforcements had arrived. Not that Camille Boyd necessarily needed them, but they certainly couldn’t hurt.

Her Husky teammate Hannah Elaimy missed Thursday’s cut, but stuck around Desert Mountain to join forces with Boyd as her caddie Friday morning. The University of Washington junior from Yorba Linda, Calif. fed off that comforting energy and carded 66 on day three of the Southwestern Women’s Amateur. She’ll take a four-stroke advantage into Saturday’s finale.

“It’s obviously a fun time when your friend caddies for you, but Hannah knows the course and knows my game,” Boyd said. “It was nice to be able to bounce ideas off of her.”

Boyd reached the halfway point of the tournament two behind first- and second round leader Grace Summerhays, having posted scores of 68 and 69. The pair were joined by UCLA junior Ty Akabane in the final pairing, teeing off at 9:30 a.m. at Desert Mountain’s picturesque Geronimo Course. Boyd avoided penal fairway misses and rolled in putts en route to her third straight round in the 60s.

“Maybe I missed one or two fairways, but out here if you get off the course you end up in rocks, cacti, bushes, you could be anywhere,” said Boyd. “It was nice to give myself a look on every hole.”

Boyd said that carrying a four-shot lead into the final round will not affect her approach. “I just need to do the same things I’ve been doing, stick to the same game plan, and play to the best of my ability without worrying about the rest of the field.”

Boyd made headlines this season at the Juli Inkster Meadow Club Collegiate when she shot a final-round 65 to tie the Meadow Club course record and win medalist honors by three for her first individual collegiate title. She concluded her sophomore season appearing in all 12 events and leading the squad in scoring average at 72.8. It earned her a spot in Pac-12 All-Conference Honorable Mention.

The round of the day was turned in by UNLV sophomore McKenzi Hall, who edged Boyd by a shot with a third-round 65. She started the back nine with a bang, holing out for eagle at the par-4 10th in spectacular fashion. The shot went in without a bounce, landing directly in the hole.

The two got her to 4 under on the round before birdies at 12 and 16 wrapped up a bogey-free performance. She’ll join Boyd and Akabane in the final grouping Saturday morning.

Akabane’s third round could have gone south quickly after she opened with a double-bogey at the par-5 first, but back-to-back birdies at two and three quickly erased the damage. The native of Danville, Calif. signed for even-par 71 and is tied at 6 under with Hall.

Texas Longhorn junior Bentley Cotton jumped into the top-five with a 67 on Friday. She sits in fourth a shot ahead of Arizona State junior Ashley Menne.