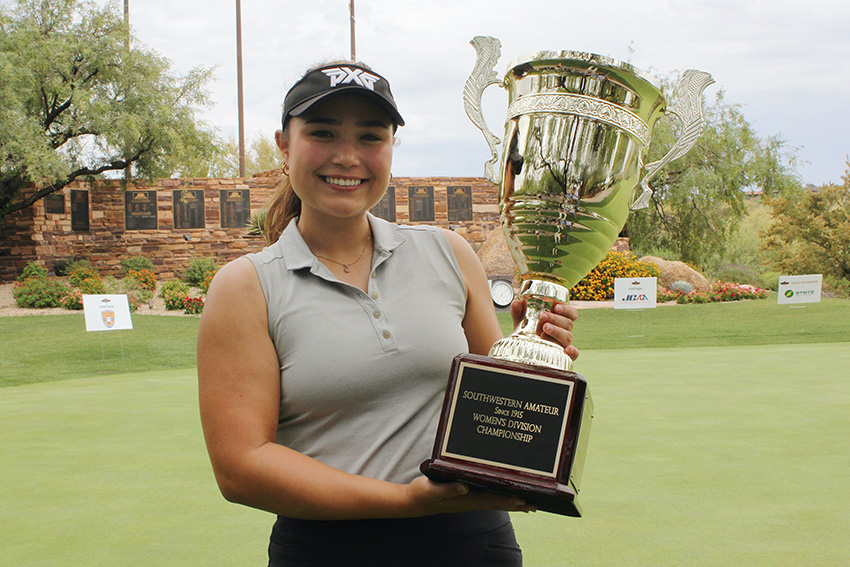 After 105 years as a men’s tournament, the Southwestern Amateur added a women’s championship in 2021. On Saturday, Camille Boyd became the second Southwestern Women’s Amateur champion.

In the inaugural event, the University of Oregon’s Ching-Tzu Chen battled unusually high temperatures and a difficult Cochise Course at Desert Mountain to put her name on the trophy with an even-par final score.

This year, the Southwestern Women’s Amateur contestants found some relief in the form of lower scoring on the Geronimo Course, and a cloud-covered final morning and afternoon at Desert Mountain Club, where there were 18 holes to play and a four-shot lead for the field to chase down. It was Boyd who started the day at the top, and it was Boyd that would stay there.

The soon-to-be junior at the University of Washington, who hails from Yorba Linda, Calif., carded a 69 on Saturday–her fourth consecutive score in the 60s–to seal a four-shot victory at 12 under par. She finished as the only player to break par in all four rounds.

“It’s a pretty prestigious event, and it feels nice to put my name on the trophy as just the second woman,” Boyd said.

Saturday’s cooler temperatures had a caveat: wind. Players battled the blustery conditions, but Boyd said she didn’t notice until the back nine. A misjudged shot at the par-4 16th led to a double-bogey, shrinking her lead to two over a surging Katie Cranston.

The diabolical par-3 18th awaited, with the tee box set farther back and the pin placed delicately above a ridge in the center of the green. Cranston’s birdie try from above the hole rolled down the ridge and led to a three-putt. Two groups later, Boyd stuffed it to six feet and drained it with a first pump.

Boyd credited her iron play for a consistently strong week at the Southwestern–the first major amateur win of her career. Her signature collegiate performance in a brilliant sophomore campaign was claiming medalist honors at the Juli Inkster Meadow Club Collegiate, shooting a final-round 65 to tie the Meadow Club course record.

She appeared in all 12 events for the Huskies and led the squad in scoring average at 72.8. It earned her a spot in Pac-12 All-Conference Honorable Mention.

“I’m excited to get back to Seattle and take a week off,” Boyd said.

Cranston’s impressive week at Desert Mountain comes on the heels of her breakout victory at the Women’s Porter Cup. There, she defeated fellow Canadian Brooke Rivers in a four-hole playoff after birdieing 17 and 18 to force extra holes.

Here in Scottsdale, the tournament was never within her grasp until the back nine on Saturday when she stuck a 3-wood to five feet at the par-5 12th to set up an eagle that pushed her to 8 under for the round. She would bogey two holes coming in but she still backed up a 33 with a 32 and signed for 65. She trailed the leader by five or more shots at the conclusion of each day but rose up to solo second place.

“It was a really great day, I had a lot of fun,” Cranston said. “This is probably one of the best fields I’ve played in.”

Cranston, a recently-graduated high schooler from Oakville, Ontario, Canada, is planning to take a gap year before joining the Auburn Tigers in the fall of 2023.

Third place went to UNLV sophomore McKenzi Hall, who was right there towards the end but a bogey at the 15th and a double on 17 ended her chances of catching Boyd. Her third-round 65 earned her a spot in Saturday’s final grouping.

Northwestern junior Jennifer Cai was next on the leaderboard following a 67 in her final showing. Considering 75 is how the Irvine, Calif. native began her week, a fourth-place finish at 5 under par was redemptive.

Rounding out the top 5 were first- and second-round leader Grace Summerhays of Arizona State University and Seattle University senior Samantha Bruce, who matched Cranston’s 65 on Saturday to secure a notable finish.