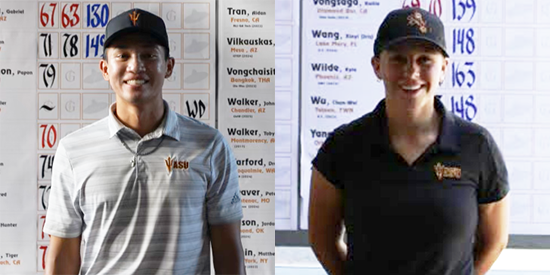 Gabe Salvanera made seven birdies in his final nine holes, carding 30 on the front side after beginning his day on the back. It rounded out a second-round 63 at Desert Mountain’s Geronimo Course and sent him into the final two rounds of the Southwestern Amateur with a one-shot lead.

“Today I had more birdie looks and I took advantage of those looks,” said Salvanera. “I was pretty solid keeping it in play and making some putts.”

The Sun Devil junior from Queen Creek, Ariz. opened with 67 and was three back of Shea Lague, who cooled off following a three-eagle performance on Wednesday. He signed for 1-under 71 on day two and is four back in a three-way tie for third place with UC Davis junior Lucas Carper and Colorado State graduating senior Davis Bryant.

Sitting just one back of Salvanera is Washington State junior Jaden Cantafio, whose bogey-free 64 similarly shot him up the leaderboard.

Bryant’s second round matched that of Salvanera — a 63 that has him four back after a debut round of even-par 71. The Aurora, Colo. native made nine birdies and an eagle on Thursday, though surprisingly never strung together more than two birdies in a row.

Forty players advanced to the final two rounds following the 36-hole cut, which had players 3-over par or better above the cut line.

After jumpstarting her second round with an eagle at the par-5 first, Grace Summerhays went two over the remainder of the day at Desert Mountain’s Geronimo Course. She’ll still carry a one-shot lead into the third round of the Southwestern Women’s Amateur.

“I feel like my score today doesn’t quite show how good I was playing,” said Summerhays. “I made a lot of birdies, just a lot more bogeys than yesterday.”

The second-best score of the day in Scottsdale went to the player sitting closest to Summerhays on the leaderboard, UCLA junior Ty Akabane. The Danville, Calif. native made six birdies and posted 66. She’s a shot ahead of Camille Boyd and two ahead of Seattle University graduating senior Samantha Bruce.

The round of the tournament thus far goes to one of three players tied for fifth 3 under, UC Davis sophomore Abby Leighton. The Santa Rosa, Calif. native began the morning with a pair of bogeys at holes 2 and 3, but quickly recovered with two birdies and an eagle to close out the opening nine. She continued to press, ringing up five more birdies on the back side post 64 — an 11-shot difference from her first round score of 75 Wednesday afternoon.

Ohio State senior Kailie Vongsaga and Pepperdine sophomore Lauren Gomez are also at 3 under, just four back of the lead.

The field was cut to the top 36 and ties following the conclusion of Thursday’s second round, with exactly 36 players finishing at 4 over par or better.